We are in search of excellent graduate students and postdocs with backgrounds across the spectrum in experimental and systems / computational neuroscience – in particular, those with experience in optogenetics, machine learning, behavioral analysis, or biophysical modeling.

Understanding how insects navigate odor plumes has been challenging because of difficulties in visualizing odors and measuring fly responses in the same experiment. We identified an attractive odor that allows us to do this, enabling us to characterize navigation in naturalistic plumes that vary in both space and time. We found that when the timing and location of odor encounters become uncertain, walking flies abandon reflexive strategies determined by the most recent whiff, and instead navigate using biased random walks shaped by an entire sequence of odor encounters. Combining this framework with optogenetics, we are examining the computations and neural mechanisms insects use to navigate odor plumes. Key questions are: How do flies adapt their navigation strategy when the statistics of the odor plume change? How do they combine information from wind direction and odor encounters? How do they incorporate the feedback of behavior onto sensation into their navigation strategy? Which neural circuitry support such computation? 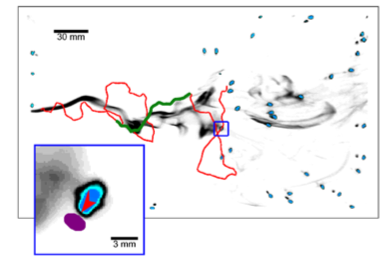 Adaptation and the combinatorial coding of odors.

Insects detect odors using an array of olfactory receptor neurons (ORNs) that each express only one type of odor receptor (OR). To understand how this system simultaneously encodes odor identity and intensity, we characterized ORN adaptation. We discovered that ORNs adapt their gain to both the mean and variance of the signal intensity, that adaptation to the mean follows Weber-Fechner’s law (just like in E. coli), and that such front-end adaptation may contribute significantly to preserving combinatorial odor codes in the presence of environmental fluctuations and background odors. A key aspect of these findings is that except for differences in odor-receptor affinities, ORN responses and adaptation dynamics are similar across many odor-receptor combinations. WE are investigating the molecular origin of such invariance using eletrophysiology, behavior and targetted genetic mutations using generated using CRISPR/Cas9.