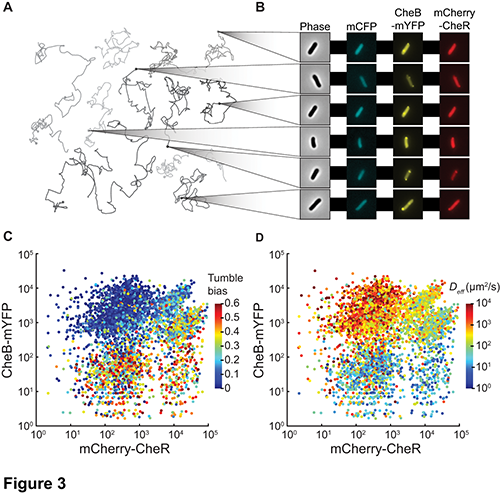 In this work, we correlate for the first time Fluorescence Analysis with Single-cell Tracking (FAST) to investigate the effects of stochastic fluctuations in protein numbers on the swimming behavior of thousands of individual E. coli cells. We discovered that the mean and the variance of single-cell behavior in a clonal population can be adjusted independently from each other by controlling the expression of the chemoreceptor modification proteins, CheR and CheB, only. This result identifies a mechanism through which the degree of phenotypic diversity of a population can be selected for by adjusting the global level of expression of CheR and CheB while keeping their ratio constant, which, as shown in previous studies, confers functional robustness to the system.

PLoS Com Bio, in press  ( paper is available ahead of print at bioRXiv).